Baby Jesus, and Secret Hidden Messages Just For You

(in which I present my Christmas thoughts this year by discussing not so secret messages, which version of Jesus you prefer, The Mandalorian (Baby Yoda), The Book Thief, Death, Birth, and All Things New.)

I just finished reading “The Book Thief.” I was given the book by someone who told me that the narrator reminded them of me. It didn’t take too long into it that I realized the narrator is Death.
That’s its own thing, but given how much my head’s been swirling lately, and just how many thoughts go circling around up there, I can see the similarities.
But it’s the last line that really clinched it for me, a last note from the narrator.

It’s true. Well…it’s true that that’s how the book ends. But not just that.
It’s true of me too. I am haunted by humans. One of the greatest gifts I can say I’ve gotten was stories of old, of people I never met nor knew. Letters written. Windows into just a PART of someone’s life.

But isn’t that what a story is anyway? Just a window? A person is so much more. And to know the person is SO much more than just knowing the story.

“Every story ever told really happened.
Stories…are where memories go when they’re forgotten.”

I can’t speak to why memories get forgotten, but I can say with a certain conviction that stories impact us all differently, and the emotions they elicit in each of us individually can be just as varied as their impact.
But stories have themes. They may even have recurring messages. Some are poetically weaved throughout—subtle. And others are overtly stated right at the beginning.
In The Book Thief, the last line is the narrator stating, “I am haunted by humans.” But one of the first lines is this: “HERE’S A SMALL FACT You are going to die.”

Seems a bit overt, probably probing, begging you to ask yourself the question, “Am I okay with this? Am I okay with dying?” Maybe even makes you get a bit more philosophical in your self reflection and introspection, “What’s it mean to die? What’s it mean to be alive? What’s it mean to die while still living?”
But the more I read on, the more I realized that the Book Thief is less about the character of Liesel Meminger, and more a character study of Death itself; AND as a result, a means of which causes you, the reader, to engage with the character of Death, and perhaps more subtly, your relationship to that character—to Death.

How do you relate to Death?

Well. Going back to Christmas. We’ve got a story of Birth, not Death (though, maybe as you’ll see soon, perhaps the story of Christmas is as much as story of Death as it is of Birth).
Put simply, I think the story of Christmas, of Bethlehem, and of the birth of a baby—the revelation that the most important thing in the universe is an infant—also serves to reveal more about you, the reader, and how you engage with each character.
It’s almost inescapable.
Unavoidable.
And ohhhh how we try so hard to do so. Let’s make it about making sure we say the right thing around the holiday, or do the right thing, or buy the right thing. Let’s keep busy. Let’s not think too hard. Let’s do just enough acknowledgment that we feel we’ve serviced the “heart” of the holiday, but not in a way where it changes us, or causes us anxiety about ourselves. Let’s not think too hard about it so as to ask the questions that REALLY SHOULD be asked, the ones that may just bring about the end of us.
It is, after all, simply the birth of the “Savior,” and we KNOW what name to write on the birthday cake.

And it’s the end of the story—the death and resurrection—that we’re left with.

But what does the beginning tell us? What does it reveal about ourselves?
Which version of Jesus do YOU pray to?

I started this post with a clip from Talladega Nights: The Ballad of Ricky Bobby. It’s probably my favorite scene from that film because it presents such a real and honest display of everything I’ve been saying up to this point.
What version of Jesus you prefer and like the best says more about you than it does about Jesus.

And what’s wrong with liking the baby version the best?
Because it’s weak? Because it’s not the savior? Because it requires care and a more delicate hand on your part?

It’s the baby version that requires YOU to die for IT.

The baby version requires more on your part. More questions. More self reflection. More introspection. More anxiety. Maybe even the end of you. It requires honesty. Vulnerability.
It requires being an adult. Being a parent. Care. Tenderness. Protection. Realness. Stress.
Humanity.
You feeling weak, frustrated, open to hurt.
It requires you being human.
Sooo…

How do YOU relate to BABY Jesus?

Recently—much like most redblooded Americans—I began watching Disney+’s “The Mandalorian.” It didn’t take long to reveal the big shocker of the series: a baby Yoda. 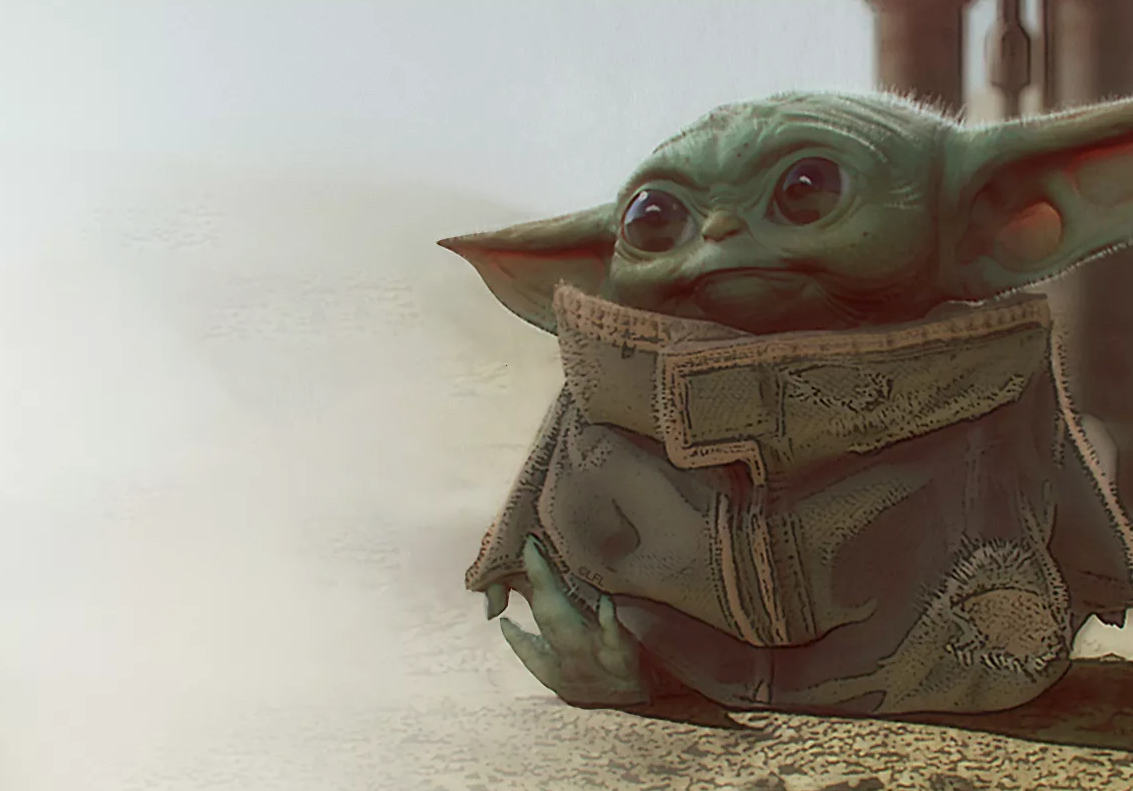 Friggin adorable. You should see him eat a frog. Or play with spaceship controls. Or disobey.

“Whoa! Spoilers!” You say. To which I respond with, “Welcome to the internet.”

But the series turns heel at that moment. And what you THOUGHT was a story about one character and his history, becomes about how he relates to an infant.
See he doesn’t know baby Yoda, or what a Yoda species means, it’s power, rarity, bigger narrative implications. He just sees an infant. An adorable one.
And come episode three, the titular Mandalorian abandons everything to take care of the infant.

It’ll be interesting to see what happens at the story’s end, because we the audience don’t know what this baby is, or how important it is, or what will happen to it in the overall narrative.
Like we do with the infant born in a middle eastern cave, and laid in a food troth.
We know the end there. “It is finished.” (Though I don’t think all of us understand the end…)

What if all we had was the beginning (of the story)?

Personally, this year has brought about a lot of change. Like…a LOT.
This year has brought about the end of me in so many ways, it’s impossible to fully get into without long, drawn out conversations that stretch far into the night.
And anyone that knows me well enough knows how difficult and challenging this season has always been to me. Not just Christmas, but my birthday as well (which happens to be coming up soon, and falls prior to Christmas). This whole season, just difficult no matter WHAT else is going on in my life.
And I can always tell the struggle has begun because—without FAIL—my lower back begins to hurt to the point of debilitation. This year it hit two days ago. And each year I think, “Gah. What did I do? How’d I pull my back THIS bad??” And then I realize this happens EVERY YEAR.

But something clicked this year that has changed what I view this season to be. No, not that it cured my lower back pain.
The theme. What’s at the heart of the story of this season? The birth? Baby Jesus? All the questions and self reflection and introspection that relating to Baby Jesus brings?

“Do not be afraid.” Zacharias. Joseph. Mary. The shephards. “Do not be afraid.”
This is one of the first lines of the narrative in both the Gospels of Matthew and Luke that provide us the Nativity Story, the birth of Jesus.
“Do not be afraid.”
THIS is the theme of the story. Each of these characters may have been told the importance of Jesus, what Jesus will be, all of it. But what they were facing in the here and now was this: an infant. A baby.
“A baby changes everything…”

How much responsibility. Care.
The END of you. A NEW relationship.

And it’s scary. It’s frightening. There’s SO many what-ifs. And it will more than likely be the end of you. But all of this is GOOD NEWS. The END of FEAR. Which is good news in itself.

This is how the story starts. Overtly.
And if anything is subtly weaved throughout the rest of the story, it’s this message.

So I may not know the future. I don’t, actually. Just like I don’t know what’s gonna happen in The Mandalorian, or if having a baby Yoda is somehow going to play into The Rise of Skywalker.
I don’t know it. And not knowing the story can be very scary. And present the end of me.

But I’m not afraid.

And no, this isn’t me making a subtle secret message. (But then again, I’m not that good of a storyteller.) I’m not being poetic, I’m not being mysterious or obscure.
I’m saying this directly and overtly.

“DO NOT BE AFRAID.”
I bring you good news. And it’s this: You don’t have to be afraid.

Merry Christmas. Happy Holidays.
For this is only the beginning. And it’s not just a season. It’s a new life.
THIS is the new year. And none of us have anything to fear.

“It’s true. WHEREVER you find love, it feels like Christmas.”

And Christmas means YOU HAVE NOTHING TO FEAR.
So…WHEREVER you find love…DON’T BE AFRAID.
THAT’S good news.

And I believe THAT is worth giving thanks.

So.
Let’s all give thanks to tiny, 8lbs 6oz, newborn infant Jesus, who doesn’t even know his shapes and colors.

->and the world WILL be better for this…

2 responses to “Baby Jesus, and Secret Hidden Messages Just For You”